Let’s welcome Pat Simmons to the blog again. Last week, we shone the spotlight on her book My Rock: Tabitha. Today, you get to read my interview with Pat about her book!

Pat shared great insight into her story and her life as an author, in this interview.

Author Interview with Pat Simmons about her book My Rock: Tabitha

Alexis: This book focuses on three sisters living in different cities. Why did you choose to tell their stories?

Pat: God told me to write it. “Someone needs to hear from Me,” He said. I obeyed to bring awareness to the sacrifices of caregivers who are struggling in plain sight.

Alexis: What were the challenges in merging three storylines?

Pat: I focused on Tabitha’s story while setting up Kym and Rachel’s. No two caregivers’ situations are the same, so I will highlight different scenarios in the other stories. Our society has an increasing number children, teenagers, and young adults with special needs who will need care for the rest of their lives as well as elderly loved ones.

Alexis: Would you say that this book is Contemporary Romance, Women’s Fiction or something else? Please explain its genre and category.

Pat: I write Christian romance about contemporary themes and universal issues that are important to women. There are differences among inspirational, sweet, and Christian romances. Christ’s whispers and the Scriptures are integral parts of my romantic storylines, so I classify myself as Christian romance writer. Inspirational romance may focus on positive and uplifting thoughts without Christ being the center.

Alexis: Why did you write this book with a focus on caregivers?

Pat: Besides God inspiring me? I like to tackle real issues in my books. I always want my readers closing the book knowing something they didn’t know in the beginning.

Alexis: How did you select the three cities for each of your main characters? Give us insight into the research that went into writing this story.

Pat: It was random choices that I felt I could get help from a friend or reader to assist me with the cities’ backdrop. I have a news background, so I approached the topic as a reporter. I interviewed caregivers and organizations’ spokespersons, attended meetings, and did online research. I also made sure I had a clear understanding of dementia and Alzheimer’s.

Alexis: Why is your character Tabitha from St. Louis struggling to find a balance?

Pat: Her situation can be typical of a caregiver. The demands of her new job were overwhelming. After work, she had no respite at home, because she focused on Aunt Tweet’s needs.

Alexis: In what ways does a potential romantic relationship rock Tabitha’s world?

Pat: When it comes to romance, a person wants to give their all to invest in a relationship. Tabitha felt the timing wasn’t right. She knew there could be no spontaneity like going to a movie at the last minute. Aunt Tweet’s well-being had to take priority over everything Tabitha wanted to do. Marcus proved her wrong. He convinced her that they were in it together.

Alexis: Why is Tabitha beyond overwhelmed with being a caregiver?

Pat: Despite her textbook knowledge of medical terms and conditions, she wasn’t prepared for an 89-year-old’s contrary behavior to mimic that of a helpless child. The person can appear self-sufficient, but little by little, their mind begins to slip away. She is taking care of her great-aunt Priscilla “Tweet” Brownlee who doesn’t have any children of her own.

Alexis: Who is Marcus Whittington and what role does he play in this story?

Pat: The story begins with a neighbor whose surveillance video captured a woman sitting on her porch a few times in the morning. When he learns that the elderly woman wanders from home, Marcus accuses Tabitha of endangerment and threatens to call the authorities on her. He’s clueless to Tabitha’s frustration as she tries to keep track of her aunt’s every movements 24/7.

Alexis: What is it about the elderly that brings out a soft side in Marcus?

Pat: He had endearing memories of his grandparents. Marcus begins to see the Aunt Tweet on the outside isn’t the same one on the inside. Recognizing Tabitha’s frustration and helplessness, coupled with his growing attraction, gives Marcus reasons why he can’t walk away.

Alexis: Why does “every caregiver need a caregiver” in this story and in real-life?

Pat: As many caregivers focus their attention on the loved one’s needs, they don’t take care of themselves. That scenario happened to my next-door neighbor. She cared for her husband for years while she still worked. We didn’t know she was very sick until after she died barely nine months later after her husband had passed. My message to caregivers is to take care of yourself. People on the outside should not assume caregivers have it under control. They need compassion, help, and respite, especially if they are caring for two or more generations, such as grandchildren and an aging mother.

Alexis: What do you want your readers to remember most about this story?

Pat: Being a first-time caregiver is a learning experience no different than a husband or wife becoming parents for the first time. You don’t know what to expect, you have to infuse patience with love.

Alexis: Do you only write about African American or Black characters? Why or why not?

Pat: My main characters are always Black because I’m Black or African American. Minorities like to see themselves portrayed in movies and sitcoms on television. Reading about people of color is just as appealing, especially in storylines that reflect the Black community. For me, it’s an honor to write about Black love when society has denied it exists from slavery to the White House. The big publishers, even some Christian publishers, don’t believe a character with brown skin and curly hair is attractive as a hero or heroine.

Alexis: Would you like to see more African American (AA) people on the covers and characters of color inside the stories of CBA books? Why or why not?

Pat: YES without a second thought. Christians are not one race as Candace, Queen of Ethiopia, is mentioned in the Bible. Native Indians, Mexicans, African Americans, and other’s stories are just as important. Unfortunately, stereotypes and racism have kept many great AA authors out of the publishing industry. One national bestselling author was offered a contract in the 90s, if she changed her characters from black to white.

Alexis: What did you enjoy the most about writing “My Rock”?

Pat: Two things: Showing Tabitha’s mindset that she considered it a privilege to take care of Aunt Tweet and despite the frustration, she did it with love and respect; and inspiring readers that there is no obstacle too great for love to find them. 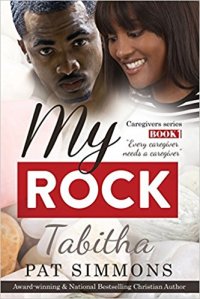 Three sisters living in three different cities (Baltimore, St. Louis, and Nashville) make a pact to share responsibilities for their aging relative after authorities find Aunt Tweet across state lines. Her destination had been a neighborhood grocery store. The siblings soon learn the definition of caregiver includes a cup full of patience, a slight sense of humor, and when to cry out for help. Women juggle between career and family all the time, but Tabitha Knicely (St. Louis) is struggling to find a balance. Romance is the last thing she’s trying to add to her list. The Aunt Tweet she knew all her life is not the same one who is residing in her home when she accepts the role as a caregiver for six months.

Overwhelmed can’t begin to describe her emotions. Marcus Whittington is an opinionated, successful business owner, but he has a soft side when it comes to the elderly. They remind him of good memories of his grandparents. When Aunt Tweet is the mystery woman who stakes out his porch, he becomes concerned that she is not being taken care of properly. He sheds his misconceptions about what Tabitha isn’t doing right when he discovers that every caregiver needs a caregiver. Marcus knows in order to win Tabitha’s heart; he has to charm Aunt Tweet’s too.

Pat Simmons is celebrating ten years as a published author with more than thirty titles. She is a self-proclaimed genealogy sleuth who is passionate about researching her ancestors and then casting them in starring roles in her novels, in the hope of tracking down any distant relatives who might happen to pick up her books. She has been a genealogy enthusiast since her great-grandmother, Minerva Brown Wade, died at the age of ninety-seven in 1988.

Pat describes the evidence of the gift of the Holy Ghost as an amazing, unforgettable, life-altering experience. She believes God is the Author who advances the stories she writes.

Pat holds a B.S. in mass communications from Emerson College in Boston, Massachusetts. She has worked in various positions in radio, television, and print media for more than twenty years. Currently, she oversees the media publicity for the annual RT Booklovers Conventions.She is the multi-published author of dozens of Christian titles, including the #1 Amazon best seller in God’s Word category.

She is the multi-published author of dozens of Christian titles, including the #1 Amazon best seller in God’s Word category A Christian Christmas. Her award-winning titles include Talk to Me, ranked #14 of Top Books in 2008 that Changed Lives by Black Pearls Magazine.She is a three-time recipient of the Romance Slam Jam Emma Rodgers Award for Best Inspirational Romance for Still Guilty (2010), Crowning Glory (2011), and The Confession(2016). Her titles consistently hit the top ten ranking in the BCNN1/BCBC National Bestsellers List, two books in the Carmen Sisters series hit #1 and #2.

In addition to researching her roots and sewing, she has been a featured speaker and workshop presenter at various venues across the country.

Pat has converted her sofa-strapped sports fanatic husband into an amateur travel agent, untrained bodyguard, GPS-guided chauffeur, and administrative assistant who is constantly on probation. They have a son and a daughter.

Readers may learn more about Pat by contacting her at authorpatsimmons@gmail.com.

Visit Pat’s website, http://www.patsimmons.net, to get to know her better.