Just thought I’d drop in with a book spotlight on Tonya Jewel Blessing’s The Melody of the Mulberries. Check out the excerpt below! 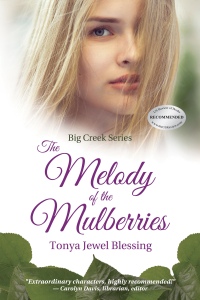 This Appalachian Big Creek sequel is set in West Virginia, during the 1920s, where granny witches and spiritualism often show the path for wanderers to take, especially in matters of the heart. Emerald Ashby’s younger sister, Coral, determines to visit the family’s nemesis, Charlie, now stewing in prison.

When Mercy returns to the holler of Big Creek, she comes well-armed to re-enter Ernst’s life, but he has already found a new romantic attraction. No matter, Mercy has brought along her own spiritual tools and a special friend who guides her way around this inconvenience.

“Coral sat in contemplation under a mulberry tree. It was spring, and the fragrant female blossoms promised the mid-summer arrival of first white, then pink, then crimson, and finally deep purple berries. The white berries were hard and tart and enjoyed by the quail, wild turkeys, mocking birds, and blue jays. The blackish-purple berries were soft and sweet – perfect for pies and jams.

Where Emerald Ashby’s story leaves us in the last pages of The Whispering of the Willows, her pure and innocent sixteen-year-old sister Coral Ashby’s story begins. Like the changing mulberries, the Appalachian siblings Coral and Ernest Ashby, navigate their lives and love interests through the Spanish Flu epidemic, poverty, and various as sundry prejudices.

Accompanied by friends and foes, matters of the heart complicate life for Coral and Ernest. Relationships must be journeyed carefully.

Clean reading romance, a cozy mystery tucked in at the tails, and a fun, but realistic history of the people and cultures of the Appalachian trail make this story uplifting to many varied audiences.

Charlie and Charley were coming to Big Creek. Charlie was a man. He had a spirit, soul, and body. He had grown up in the hills and been sent away because of the harm he had done to others. Coral had invited Charlie back to the holler. He wasn’t physically present, but, according to Emie, Coral might as well have sat him down at the table to enjoy Sunday family dinner.

The other Charley was an evil spirit. He was ancient and from a faraway land but traveled with others when invited. His ways were frightening and mysterious. He was best left alone, but, had also been invited to Appalachia. Mercy, a returning resident, considered him a friend.

He heard rustling in the school yard and spotted, next to the log where he and Rudy had sat earlier, a black bear and her two cubs. The female was larger than most. Ernest, trying to stay still and assess the situation, estimated her weight to be 300 pounds or more. She was blue black. The cubs, which were busy wrestling, were cinnamon colored.

Ernest grew concerned when the mama put her nose in the air and began to sniff loudly. The bear then slapped the ground with her large clawed paw and started to shake her head. In general, black bears were usually shy. Mostly when seeing a human, they grunted and bluffed aggression, but with cubs close-by Ernest was troubled. He knew not to run and to remain submissive in his posture.

His heart seemed to quit beating when he heard Lottie approaching. She had entered the back door of the schoolhouse. He could hear her brisk steps on the worn wooden floor. The mama bear began a slow approach and started to growl. He yelled a warning to Lottie, but within seconds the front door opened to the porch where he was standing. She had her bow and arrow in hand and was preparing to shoot.

True to his words, the bear turned tail and headed back to her cubs. Eruptive gas escaped from her backside which signaled her cubs that it was time to move on.

When the odor reached Charlotte, she began to gag. “What is that?”

When Charlotte joined in his laughter, it seemed natural and right to place his arm around her. She lowered her bow and snuggled next to him.

One of the older boys described the mystical Yahoo and another Dwayyo. Snarly Yow was also mentioned. Ernest did his best to expose the fear filled stories as Indian legends and wild imaginings of the early Appalachian settlers, but the learners couldn’t be dissuaded. Thoughts of giant hairy creatures; wolves that walked like humans and had fangs; and snarling monsters who appeared after dark had the students in a fearful state.

In order to redirect their attention, he thought about telling the story of Goldilocks and the three bears but remembered in one of the earlier versions of the fairy tale that Goldilocks was an old woman who ended up impaled on a steeple. He shuddered at the thought.

“Students start pushin’ the tables and chairs to the sides. I’m gonna teach you a rollick called the dancing bear.”

The supposed talking bird was medium-sized. It had a long-tail with green and blue plumage. Its neck was yellow, and its head was red. The bird looked at her, held its head upside down, and then when right-sided again spoke plainly, “Hot damn.” Then added in a husky voice, “Hello, beautiful lady.”

What kind of creature is this? Charlotte thought.

Next, the bird flew from its perch, landed on her shoulder, and started singing.

The granny witches in the holler believed that snakes visited in pairs, and if one snake was killed that the other would return for vengeance. Ernest knew it was nonsense. He wondered what the grannies would have to say if they knew that male snakes had two penises.

The sow’s teats were full. It was obvious that she was miserable. Ernest approached her cautiously. His hand was filled with grain and his voice filled with song.

He knew that Rudy was trying his best not to laugh. Ernest also knew that some sows appreciated a good love song. When he was a boy, raising hogs with his father and brother, he had learned that a gentle touch and soft voice accomplished more than a hickory stick and harsh words.

The mama took the grain from his hand. Ernest began to rub the pig’s back. His hand traveled lower toward her side. The sow then laid down, and Ernest gently patted her belly.  As the piglets drew near, he placed them each on a teat. As he continued to sing his love song the mama relaxed, and her babies nosed and nursed.

Tonya grew up in rural Ohio. She currently lives in South Africa with her husband of 35 years. Tonya decided to trust Jesus for the destination of her young soul at the age of four.  As a young adult, she worked for a well known television evangelist, and traveled with a Christian drama group throughout the Midwest.

Tonya attended Arapahoe Community College and Akron University, and has enjoyed a trusted position in formal and informal ministry settings and training opportunities. Tonya also worked as a children’s pastor, youth pastor, and women’s pastor. She served on staff at Praise Church in Littleton, Colorado for a number of years, and also worked as the Director of Women’s Ministries for Journey Church in Strasburg, Colorado. She has served on a number of ministry boards that support concerns for women.

Tonya and her husband operated Strong Cross Ranch Colorado for over eleven years, a place of respite for missionaries and ministers. They had the honor of hosting over 2,000 guests during that time frame. The Blessings relocated their ministry to South Africa in June of 2012. The ministry continues to serve and partner with local pastors and missionaries through a variety of creative and responsible means.  The Blessings oversee building projects, feeding programs, educational services, interventions, and church planting.

Tonya is a well-known national and international speaker, often serving women in areas of the world which cannot be publicized.  She writes articles and devotionals for missions’ magazines and women’s groups and is also a published author.  She is the author of two historical fiction books The Whispering of the Willows and The Melody of the Mulberries. Both novels are set in Big Creek, West Virginia, during the late 1920’s. Tonya has also co-authored a devotional called Soothing Rain – Living Water to Refresh Your Soul. All three of Tonya’s books have received literary awards.

Tonya enjoys speaking and sharing her life with women at retreats and events.  She thinks that women are amazing, and appreciates that the female gender is multifaceted yet fragile creations of God. In her personal life and as a speaker, Tonya believes that God’s Word is powerful, and needs to be read and written on her heart and on the hearts of women everywhere. For additional information, please review her author and ministry webpage: www.TonyaJewelBlessing.com

She was ordained in 2011 and is currently pursuing further pastoral and biblical studies.  For additional information regarding Strong Cross Ministries South Africa, please visit the ministry web page – www.strongcrossministries.org.

One thought on “Book Spotlight: The Melody of the Mulberries”