We made it to Friday! WOOHOO! This has been a week, but you know what I do when weeks are frustrating? I grab some coffee and read a good book. This week I read The Solid Grounds Coffee Company which is the last book in The Saturday Night Supper Club series by Carla Laureano. This series has been fantastic to read! 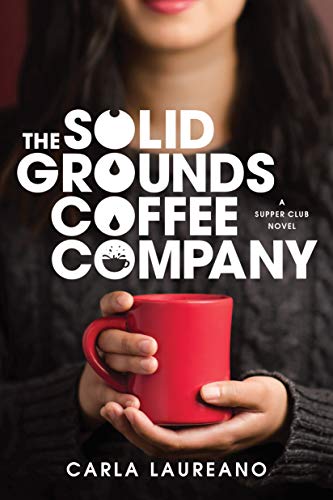 Analyn Sanchez can handle the long hours and arrogant clients that come with her job as a crisis management associate at Denver’s largest publicity firm. The high-powered job, expensive condo, and designer wardrobe are all part of her plan to prove to her family that her life choices haven’t been in vain. But when she’s asked to cover up a client’s misdeeds with serious moral and legal ramifications, she can no longer sacrifice her conscience for her career . . . and the cost is no less than her job.

Ever since a devastating climbing accident in South America eight months ago, and a bad decision that dried up his sponsorships, professional rock climber Bryan Shaw has found himself at similar loose ends. When the opportunity to buy a coffee farm in Colombia arises, he jumps on it—only to discover his wandering ways have left him utterly unprepared to run a business.

When Bryan returns home and offers Ana a role in his company as a solution to both their problems, she’s desperate enough to consider working with the far-too-flippant and far-too-handsome climber, even though he’s the polar opposite of her type A nature. As they delve deeper into the business, however, she begins to suspect there’s much more to Bryan than she’s given him credit for . . . and that sometimes the best plans are the ones you never see coming.

Laureano has proven once again that she is a fantastic story teller. Readers have been waiting patiently for this story, and it did not disappoint. What I didn’t expect was to have the prodigal son story to hit me so hard, so fast. Bryan is a character we can all relate to at some point in our lives. He lived life for himself, until he came to a point where all he could do was look up and realize who he needed to live for. From that point on Bryan is different. Yes, he still had some faults and bumps. But Laureano weaves an encouraging tale of how the broken can be made whole over time. They will continue to have imperfections, yet still grow as individuals.

Bryan and Ana’s love story is probably my favorite of this series. The attraction is always there for sure, but Laureano took her time with them. Their relationship wasn’t forced. There were obstacles to overcome, as there is with any new relationship. Readers have been waiting for this story for the entire series after all! What I loved most is that Bryan and Ana were real with each other. They had some real conversations, sweet moments, laughable moments, and all around great chemistry.

While I am sad to see this series go, I can honestly say Laureano ended it with a bang. And the good thing is, we can visit these friends at any time! I highly recommend reading this series, from start to finish. I think you’ll find the friendships and relationships will bring a smile to your face, and some encouragement to your hearts.

Carla Laureano is the RITA® Award-winning author of contemporary inspirational romance and Celtic fantasy (as C.E. Laureano). A graduate of Pepperdine University, she worked as a sales and marketing executive for nearly a decade before leaving corporate life behind to write fiction full-time. She currently lives in Denver with her husband and two sons, where she writes during the day and cooks things at night.

Connect with Carla online at her website (www.carlalaureano.com) or on any of these social media platforms:

Do you enjoy reading friends-to-romance stories?