Happy Wednesday! It’s almost Good Friday which means it’s almost EASTER!! Hallelujah! To paraphrase a popular sermon, “It’s Wednesday but Sunday is coming!” So thankful that we have a Savior who purchased with His blood “persons from every tribe, language, people, and nation”! (Rev 5:9)

Ahem. Sorry about that little mini-sermon there – a freebie for all y’all. 😉

Today, I’m continuing to spotlight the Extreme Devotion series from Kathi Macias with a look at More Than Conquerors. 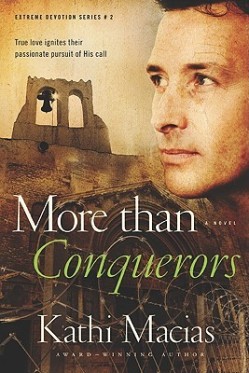 True love ignites their passionate pursuit of His call

With violent crime on the rise and the political climate changing throughout certain parts of Mexico, the opportunity for open Christian witness, particularly in some areas of Chiapas State, is rapidly decreasing. Hector Rodriguez pastors a small church in the tourist-popular border town of Tijuana. He also routinely carries Bibles deeper into the hostile areas of Mexico, where he ministers despite increasing difficulty and persecution.

Hector’s mother accompanied him on one of those trips and felt God called her to stay in the little village of San Juan Chamula, where she uses the Scriptures to teach reading to the families who are open to it. In retaliation for Hector’s bringing the Bibles into areas hostile to Christians and in an effort to dissuade him from continuing to expand his ministry there, Hector’s mother is murdered.

Hector must decide if he will continue his work despite his worries about protecting his wife and children.

Kathi Macias is a multi-award winning writer who has authored more than 50 books and ghostwritten several others. A former newspaper columnist and string reporter, Kathi has taught creative and business writing in various venues and has been a guest on many radio and television programs. Kathi is a popular speaker at churches, women’s clubs and retreats, and writers’ conferences. She won the 2008 Member of the Year award from AWSA (Advanced Writers and Speakers Association) and was the 2011 Author of the Year from BooksandAuthors.net. Her novel set in China, Red Ink, was named Golden Scrolls 2011 Novel of the Year and was also a Carol Award Finalist; her October 2012 release, Unexpected Christmas Hero, was named 2012 Book of the Year by BookandAuthors.net. Kathi “Easy Writer” Macias lives in Homeland, CA, with her husband.

Kathi is passionate about The Voice of the Martyrs and Open Doors. To learn more about the persecuted church, please visit VOM’s website and Open Doors Website.

What about you? What do you think you would do in Hector’s position?

One thought on “Book Spotlight: More Than Conquerors by Kathi Macias”